Why I crave chikki every winter 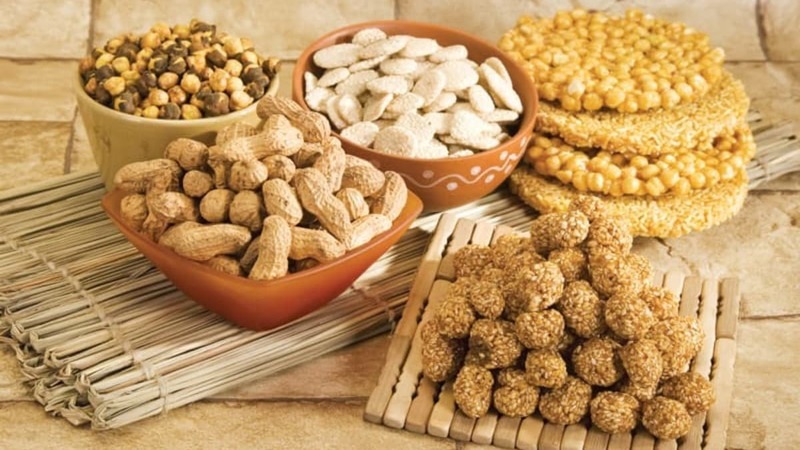 Nostalgia is a wonderful thing, it edits as it reminds the mind of the happy memories.

We somehow remember the call of the gajak wala on the street, ‘Aaray gajak lay lo,’ the pearl-like rewrri in the glass jar, the tiny and shiny chikki candy at the school canteen, and the yellow pateesa at the mithai (sweetmeat) shop, with unadulterated joy, while forgetting all the other struggles that may be happening simultaneously.

Like insisting for a portion of the desi winter candy before a meal and getting a refusal from mom, or getting into trouble for devouring an entire batch without considering portion size.

It was the mid-’70s that we moved into our house in Defence, Karachi. That was the time when one could hear the waves of the Arabian Sea even in a house that was a mile away from it, and the batli-paper wala, machhi wala (fish vendor), Ishaq kapray wala (cloth vendor), qaaleen wala (carpet vendor), naaee (barber) and the gajak wala would roam the residential streets, calling out inhabitants to indulge in purchase and conversation.

I remember Kaleem Baba, the gajak wala, with such fondness. Every midday Saturday his route was the streets of Defense, Phase V. I waited for him, and his loud melodious ‘Aaray gajak lay lo,’ was like a call to prayer. Running down the stairs, with change in a tight fist, I got my stash of winter candy.

It was one such chilly December, the year my little brother was born, that my grandparents invited Kaleem Baba for a cup of garam chai, warm jalebi and gup shup (tete-a-tete). And it was that day he told me stories of gajak, rewrri and peanut chikki (peanut brittle).

‘Gajak’ is a winter candy, popular in Northern India and Pakistan. It is a dry sweet made from sesame seed (known as til in Hindi and Urdu), and sugar. It is made especially during winter since sesame is believed to have warming properties, and provides warmth from inside out. My grandfather was a candy-maker in Agra, before the 1947 partition, and told me tales of gajak-making.

He told me that sesame seeds are cooked in sugar or gurr (jaggery) syrup, set in thin slabs and can be stored for months on end. Sesame seeds originated in the subcontinental soil and are talked about in many folklore and legends, and due to many potent antioxidants found in sesame seeds, it is also called the seed of immortality.

Just then, our driver Hanif, hailing from Chakwal, joined us with a bowl of rewrri, “Array Kaleem Bhai, eat some til ki rewrri from Chakwal. My city is famous for making this delectable delight, and exporting it all over Pakistan.”

Animated 10-year-old me grabbed a handful of the pearly delights and bit into its sweet crunchiness, eagerly waiting for Hanif to continue with his tale of rewrri, but somehow Kaleem Baba overtook the tale-telling.

“Beta, this rewrri is also a til delight, mostly enjoyed in winter. My Dada used to say that it hails from Maharashtra, and I choose to believe him. He told me that to make rewrri, jaggery and glucose are melted together, clarified butter is then added to the molten mixture and the three are melted together on low heat."

Once it’s mixed, the mixture is taken off the heat, cooled to touch and formed into little bite-sized sweet balls, and roasted sesame seeds are rolled in. And the outcome is deliciously delightful. In Assam, people enjoy it with a side of garam chai (hot tea) as an after-dinner dessert.”

I looked at my Nani (maternal grandmother) and asked her to tell us tales of her chikki-making expertise. Though most of my chikki eating was acquired at the school canteen, Nani made the best home-made chikki, too, and I loved listening to her stories.

Nani looked at me affectionately and said, “No imported peanut brittle in the world could ever compare to our desi chikki. It’s a perfect blend of jaggery and ghee, mixed in with roasted peanuts.”

As I nostalgically remembered Nani’s words, I also read The Oxford Companion to Sugar and Sweets that defines chikki in the following words: brittle-type candies are so widespread, and the ingredients so widely available — especially in South-west Asia and the Mediterranean — that the confection must be an ancient one.

Having eaten desi chikki all my life, I’ve never paid attention to its origin until I started writing this article. You’d be surprised to know how it came to be. My research led me to an article titled ‘In Search of Lonavala Chikki’ where Amruta Byatnal writes, “Back in the early 1900s, when the railway line had just started operating between Mumbai and Lonavala, Maganlal Agarwal owned a modest mithai shop in town. Back then, a relatively crude variety of chikki called gurr dani, contained the same simple ingredients — peanuts, jaggery and ghee — and was popular with travellers.

As a result, the Railways decided to sell packaged gurr dani in the train. Thrilled about the exposure that their gurr dani was to receive, Agarwal and his brothers renamed it Maganlal Chikki. The sweet, however, took on the name of the town, the identity now inextricably forged.”

As a youngling I thought that chikki was only made with peanuts, however, such is not the case at all. I’ve devoured chikki made with almonds, dates, cashews, pistachios, dried and roasted coconut, roasted chickpeas, roasted sesame and sweet puffed rice, and what a treat it is to eat each time.

The euphoria of desi-winter treats, and how I wish to be 10 again, living the same winter, with the same people, surrounded by sweet beginnings of child-like awe.

Rebel Wilson shows off her incredible weight loss on Instagram

Beyonce teams up with Adidas to launch gender-neutral collection

What were 70 DJs doing in Saudi Arabia?