Perhaps it's time for Pakistan to pay off Kashmir's debt: Sh Rasheed 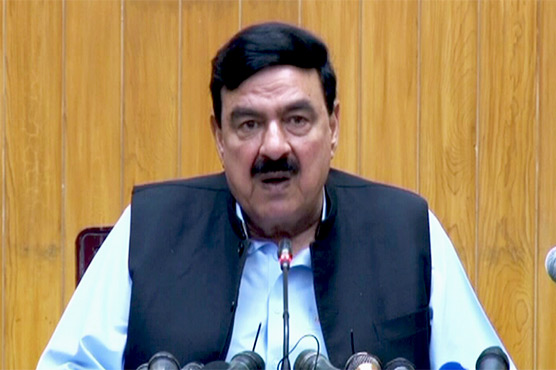 ISLAMABAD – Federal Minister for Railways Sheikh Rasheed said on Saturday that if war breaks out [between India and Pakistan], then it would be the last war.

Rasheed held a press conference, and said: “The wrong decision taken by India will turn the valley of Srinagar into a graveyard.”

“Perhaps the time has come for us [Pakistan] to pay off the debt of Kashmir,” the minister said, adding all doors of negotiation between India and Pakistan have been closed.

Regarding the Chaudhary Sugar Mills case against PML-N leaders, he said it was brought forth by the Pakistan Peoples Party (PPP) [in its tenure], and the case is moving towards its conclusion.

When a journalist asked him about what happened during Senate voting, he replied: “Amulets worked well […] I had already said that Sanjrani would win.”

About his recent differences with Federal Minister for Science and Technology Fawad Chaudhry, Rasheed said: “The matter is resolved and he is my brother.”

Three die as speeding car falls into canal in Lodhran

Qureshi to leave for Iran amid Mideast escalating tensions