Is there a link between dark chocolate and depression? 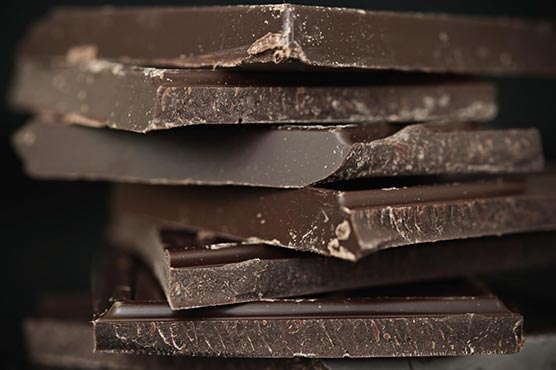 Islamabad (Online): A survey-based study looking at chocolate consumption and depression finds that people who eat dark chocolate are less likely to report depressive symptoms. What do these findings mean, and can we trust them?

Over the years, chocolate has been the focus of a great deal of research.

Thanks to its flavor and texture, chocolate is a popular food. As a result, a large number of people tend to read and share any studies that investigate its potential health benefits.

Overall, its high sugar and fat content make chocolate a snack for people to enjoy in moderation, but consumers and experts are keen to find hidden depths to this silky wonder.

The most recent addition to chocolate’s body of research comes from University College London (UCL) in the United Kingdom. The UCL team worked in conjunction with scientists from the University of Calgary and Alberta Health Services Canada.

The title of the UCL press release is, "People who eat dark chocolate less likely to be depressed," which is a bold header, indeed.

Before we continue, it is worth explaining that, as far as we can tell, this study did not receive funding from any chocolate manufacturers. The scientists published their results in the journal Depression & Anxiety.

However, these medications do not work for everyone. Also, according to the authors of the current study, about half of the people who receive a prescription for these drugs stop taking them within 6 weeks of beginning treatment.

Finding lifestyle interventions that can improve depressive symptoms is a priority. Physical activity appears to benefit some people with depression, but it does not help everyone, and not everyone is physically able to exercise.

Over the years, other scientists have also turned to dietary interventions to reduce depressive symptoms, with some success. Along these lines, the authors of the latest study explain that "[o]ne commonly consumed foodstuff postulated to have mood? enhancing properties is chocolate."

However, over the years, there have only been a few studies looking at whether chocolate truly can elevate mood in a clinically relevant way, and these experiments have produced mixed results.

According to the authors, earlier studies did not account for a wide enough range of variables, and none looked at how the type of chocolate might influence the findings.

So, in their new study, the scientists controlled for a large number of potentially confounding variables, including weight, height, marital status, education, ethnicity, income, levels of education, smoking, and other health conditions.

The scientists took data from the United States National Health and Nutrition Examination Survey. After excluding individuals who were underweight or had diabetes, they had 13,626 participants aged 20 years or older.

They assessed depressive symptoms using the Patient Health Questionnaire, which is a standard diagnostic tool for mental health disorders.

Information regarding chocolate consumption came from two 24-hour dietary recalls. The team took the first one in a face-to-face interview and the second via a telephone interview 3–10 days later.

Individuals who ate chocolate were more likely to be non-Hispanic white and have a higher household income. They were also less likely to smoke or have obesity.

After taking into account the relevant variables, the researchers concluded that, overall, there was no association between chocolate consumption and a reduction in depressive symptoms. However, the story changed when they looked specifically at dark chocolate. The authors report:

They also found that individuals who ate the most chocolate, regardless of its type, were less likely to report clinically relevant depressive symptoms than those who consumed no chocolate.

The media might herald these findings as excellent news for chocolate lovers, but the authors call for caution. The study is observational, so the team cannot conclude that chocolate relieves depression. As lead author Dr. Sarah Jackson from UCL outlines:

"Further research is required to clarify the direction of causation — it could be the case that depression causes people to lose their interest in eating chocolate, or there could be other factors that make people both less likely to eat dark chocolate and to be depressed."

Also, Dr. Jackson explains that even if future research does establish a causal relationship, scientists will need to carry out more work to understand the biological mechanism and determine the "type and amount of chocolate consumption for optimal depression prevention and management."

Aside from the thorny issue of causation, it is worth remembering that although the study involved more than 13,000 people, only 148 — a relatively small pool of people — consumed dark chocolate.

Also, the researchers only recorded food intake for two 24-hour periods. It is easy to argue that this might not reflect someone’s standard food intake over a week, let alone across months or years.

In total, the findings add another layer to a relatively muddled collection of findings. Eating dark chocolate may or may not relieve depressive symptoms. While we await further research, moderation is probably the wisest path to tread.

Huawei chief says US may ‘escalate’ but confident on business