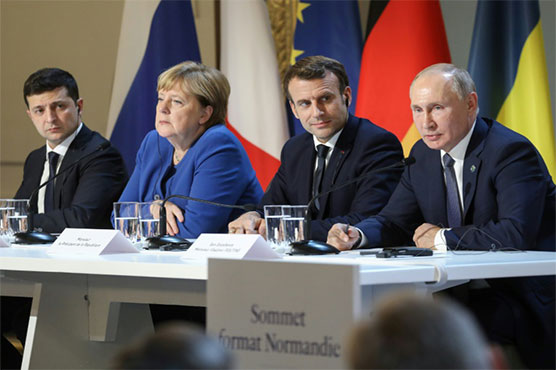 PARIS (AFP) - Russian leader Vladimir Putin and Ukranian counterpart Volodymyr Zelensky on Monday held their first face-to-face talks at a summit in Paris which agreed some measures to de-escalate the Ukraine conflict but clinched no major breakthrough on ending the five-year war.

Host French President Emmanuel Macron, joined by German Chancellor Angela Merkel, hailed the progress after some eight hours of talks at the Elysee Palace on ending the conflict between pro-Moscow separatists and Ukrainian forces in the east of Ukraine.

Four-way talks at the Elysee Palace were followed by the first ever bilateral meeting between wily ex-KGB agent Putin -- in power for two decades -- and ex-comedian Zelensky who won the presidency this year.

A joint statement by all four parties said they agreed to implement a full ceasefire and proceed with a new withdrawal of forces from conflict zones by March 2020.

Putin hailed the outcome as an "important step" towards a de-escalation in the east of Ukraine.

But Zelensky candidly admitted that despite the impressive symbolism of his first meeting with Putin and the first such four-way summit in three years, he had wanted more.

"Many questions were tackled and my counterparts have said it is a very good result for a first meeting. But I will be honest -- it is very little, I wanted to resolve a larger number of problems," he said after the talks in Paris.

Thousands have been killed and one million have fled their homes since pro-Russia militias in eastern Ukraine launched a bid for independence in 2014 -- kicking off a conflict that deepened Russia s estrangement from the West.

Separatists seized control of the Donetsk and Lugansk regions shortly after Russia s annexation of the Ukrainian peninsula of Crimea.

The issue of Crimea, whose seizure gave Putin a popularity boost at home but led to international sanctions being imposed against Moscow, was not on the table at this summit.

It added that three additional disengagement areas should be agreed in east Ukraine, "with the aim of disengaging forces and equipment by the end of March 2020".

Zelensky said a new exchange of prisoners would take place between Ukraine and pro-Moscow separatists by the end of this year.

But in a sign that more advances were needed, Macron said a new summit would be held in four months to take stock of progress on ending the conflict.

"The process is moving in the right direction," said Putin, adding that "Russia would do all that it can so that this conflict comes to an end".

Macron argued that the sheer fact the meeting had taken place was an achievement.

"The fact we are here together side-by-side is something important," he said, describing the conflict as an "open wound at the heart of the European continent".

"We have a lot of work to do but I have the impression that there is goodwill to resolve the difficult questions," said Merkel.

The Kremlin has sent signals that it is ready to work with Zelensky, whom Putin has described as "likeable" and "sincere".

But there was no sign of warmth between the two men at the midnight press conference, with the pair sitting at opposite ends of the table and with Macron and Merkel between them.

Monday s summit sought to implement accords signed in Minsk in 2015 that called for the withdrawal of heavy weapons, the restoration of Kiev s control over its borders, wider autonomy for Donetsk and Lugansk, and the holding of local elections.

The key shortcoming of the summit appeared to be the failure to agree any timetable for the holding of the local elections -- with Kiev failing to win concessions from Moscow -- and also the lack of agreement on control of the border.

The summit has been a hugely delicate event for everyone involved -- but particularly for Zelensky, who came to power after starring in a comedy show about a school teacher who suddenly becomes president.

About 200 demonstrators spent the night in tents outside the Ukrainian president s office, seeking to put pressure on Zelensky not to "capitulate" to his Russian counterpart.

For Macron, the summit was a centrepiece of an increasingly bold foreign policy he is driving despite troubles at home, where transport workers have been on strike for days in a dispute over pension reforms.

Macron, who shocked NATO allies last month by saying the alliance was suffering "brain death," has made clear his belief that Europe needs a strategic partnership with Russia.

Rockets hit near US embassy in Iraq capital

Pompeo to visit UK ahead of Brexit, then to Ukraine