Leeds back on top of Championship, Rooney scores for Derby

Human Rights Watch demands India to 'step back in Kashmir' 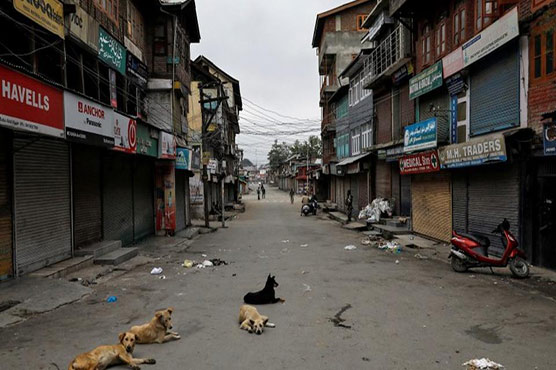 ISLAMABAD – Human Rights Watch (HRW) – an international non-governmental organization that conducts research and advocacy on human rights – on Monday demanded the Indian government to lift the communications blackout and step back in occupied-Kashmir.

In a report, the HRW South Asia Director Meenakshi Ganguly revealed that Kashmiris have been forced to live under lockdown and their leaders have been arrested, families have been unable to contact their loved ones, access to proper medical services has been suspended, security forces used tear gas and shotgun pellets on protesters and activists have been detained.

"It is now one week since the Indian parliament voted to revoke the special autonomous status provided to Jammu and Kashmir under India’s constitution, and to split the province into two separate federally governed territories. Kashmiris remain mostly under lockdown, their leaders under arrest. Phones, even land lines, are still severed. The internet is shut down. Their main mosques remained closed to Muslim Kashmiris during Eid today," Ganguly said.

"There are unconfirmed reports of numerous ongoing arrests, including of activists," Ganguly said.

Since 1947, India and Pakistan have disputed ownership of the former Muslim-majority kingdom.

"A Pakistan-backed separatist movement in India’s Jammu and Kashmir state has already claimed over 50,000 lives since it erupted in the late 1980s. The security forces’ response has included killings, torture, and disappearances. More human rights violations are certainly not what the region needs," the HRW South Asia director further said.

She urged the Indian authorities to ensure justice and accountability for human rights abuses, repeal abusive laws like the Public Safety Act or the Armed Forces Special Powers Act, which gives government forces immunity from prosecution, end aggressive treatment of Kashmiris at checkpoints and during search operations, and work towards the safe return of all the displaced, including Hindus displaced from the Muslim-majority Kashmir Valley in 1990.

"While international law does allow governments to temporarily suspend some rights in exceptional circumstances, this cannot be allowed to become the new ‘normal.’ Unless it wants to inflame tensions in Kashmir for another generation, the Indian government needs to step back, and fast," Ganguly concluded.

Trump 'should be removed': impeachment trial

Germany’s Bosch warns ‘peak car’ may lie in past