US lawmakers clash over impeachment charges against Trump 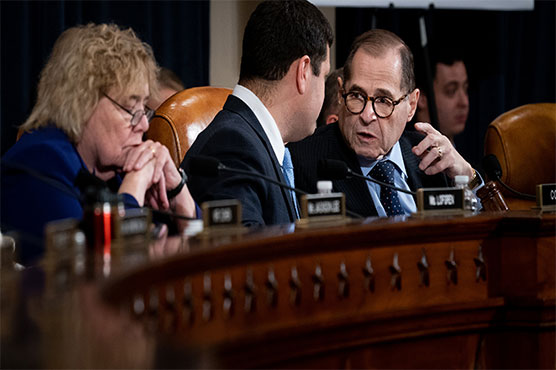 WASHINGTON (AFP) - A deep partisan rift was on full display Thursday as US lawmakers slogged towards a fateful vote to advance the impeachment of Donald Trump for his alleged misconduct involving his dealings with Ukraine.

Republicans on the House Judiciary Committee bitterly denounced the process, framing it as an illegitimate attack on the president and his supporters, while Democrats rejected their opponents  efforts to quash the articles of impeachment.

In a sign the pending committee vote to advance the articles of impeachment to the House floor was a foregone conclusion, House Democrats reportedly have already planned a vote for next Wednesday to impeach Trump.

Should the Democratic-majority chamber vote against Trump next week as predicted, he will become only the third US president to be impeached and placed on trial in the Senate.

Trump stands accused of abusing his powers by leveraging a White House meeting and critical military aid to pressure Kiev to open an investigation into his political rival Joe Biden.

He is also accused of leaning on Kiev to probe a debunked theory that Ukraine interfered in the 2016 presidential election to help Democrats.

The panel was also examining a second charge -- obstruction of Congress -- for Trump s defiance of subpoenas and other efforts to compel administration officials, including White House aides, to testify or turn over documents related to the Ukraine saga.

A fiery House Judiciary Committee chairman Jerry Nadler chided Republicans who complained that Democrats were obsessing over taking down the president and seeking to "subvert" the ability of Congress to keep the executive branch in check.

"No president is supposed to be a dictator in the United States."

Republicans repeatedly asserted that Trump has committed no crime, and they quickly moved to dismiss the first charge -- abuse of power -- in the nine-page resolution.

"Article one ignores the truth," Republican Jim Jordan declared. "Those are not the facts."

But the panel rejected the amendment with a vote along strict party lines, 17-23.

And they notably sought to turn the focus of the proceedings to Hunter Biden, the son of former vice president Joe Biden who is a frontrunner to challenge Trump for the White House in 2020.

Republicans tried unsuccessfully to insert the name of Biden s son, who served on a Ukrainian energy company s board while his father was vice president, into the articles of impeachment.

For months Trump has insisted, without evidence, that the Bidens are "corrupt" and should be investigated.

Democrats argued that Republicans were invoking Hunter as a way to smear Joe Biden during the 2020 presidential race.

Trump himself has lashed out repeatedly at Democrats in recent days.

On Thursday, he retweeted dozens of his supporters, including his personal attorney Rudy Giuliani, who stands accused of orchestrating a pressure campaign against Ukraine outside of regular diplomatic channels.

Republicans in committee lined up in defense of Trump, one by one declaring Democrats were overstepping their bounds to ram through an impeachment of a leader they have sought to oust from day one.

"The Pandora s Box they ve opened today will do irreparable injury to our country in the years ahead," said congressman Mike Johnson.

Matt Gaetz, who has emerged as a fierce attack dog on the panel, said impeachment was an assault not only on Trump but the millions who support him.

But as Republicans insisted Trump has done no wrong, House Democrat reiterated that Trump himself has admitted his misconduct.

"The president is the smoking gun," congresswoman Pramila Jayapal said, recalling how Trump directly told reporters on the White House lawn that he wanted Ukraine President Volodymyr Zelensky to open an investigation into the Bidens.

House Speaker Nancy Pelosi, who announced the impeachment inquiry in September, dismissed concerns that a handful of moderate Democrats could defect and oppose impeachment.

"People will vote the way they vote," Pelosi said.

Most indications are that the Republican majority in the Senate, where Trump will likely stand trial in January, will ultimately protect him from conviction and removal.

But impeachment would mar his record as president and could affect his re-election chances in November 2020.

Trump has signaled to aides that he wants a full-throated defense in the Senate, with witnesses testifying live.

But Republican leaders, mindful of political fallout, indicated they would rather not see the process turn into a drawn-out spectacle.

Putin says Nord Stream 2 to be completed by early 2021

NATO faces most 'complex security' environment in its history: chief

WATCH: The Taal Volcano up close